OAKLAND — An Oakland native who passed away in November at the age of 100 was once involved in a World War II flight that may have inspired the song “Comin’ in on a Wing and a Prayer.”

He ended up flying the plane on one engine for four hours, arriving late back to the airstrip at Port Moresby.

News accounts stated that several planes flew over the mountains in New Guinea, and the Americans ended up under attack by more than a dozen Japanese Zero fighter planes.

The battle lasted 35 minutes, and the Marauder’s right engine was destroyed in machine gun fire. The tail was also hit and the fuselage acquired large holes.

O’Donnell took a long route home and was chased by the Japanese planes for about an hour. By the time he got the plane and his crew of six back to the airstrip, it had been declared missing. 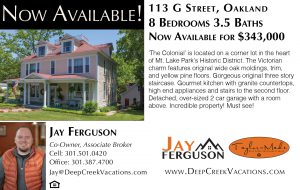 Here are 6 facts you might have not known about Garrett County! 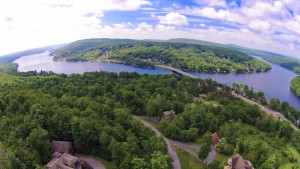 On the afternoon of July 28, Harvey Firestone went horseback riding with family members. The horses they rode were borrowed from the party of Ralph Emerson “Froggy” Cross, who was surprised to discover the famous men camping at Muddy Creek Falls while horseback riding. Upon his return, Firestone generously paid Emerson with several ten and twenty dollar bills. Emerson’s party was extremely happy with this handsome payment, as they had paid only $1.25 to rent each horse from an Oakland stable.

When they returned to Oakland, Froggy and his friends spread the news around the community that the celebrated men were camping nearby at Muddy Creek Falls. Soon, crowds of people came to see the Vagabond’s at their campsite.

Newspaper reporters covered the Vagabonds camping adventures for a national audience anxious to read about the outdoor exploits of these well-known men. Possibly energized by Muddy Creek Falls, Edison was very talkative, especially to reporters, and some of his quotes are covered in this series of articles. Being business men, the Vagabonds knew the value of good public relations.

One writer said it best: “With squads of news writers and platoons of cameramen to report and film the posed nature studies of the four eminent campers, these well equipped excursions…were as private and secluded as a Hollywood opening, and Ford appreciated the publicity.”

On July 29, the Vagabonds relaxed around the camp, exploring and studying nature, resting, and relaxing in the company of their friends, simply appreciating and enjoying the resplendent riches of nature at Muddy Creek Falls.

It was true the Vagabonds, these “gentlemen campers,” were not exactly roughing it; but, it was also true these captains of industry did go without some of comforts that they were accustomed to at home. Anyone finding them camping at Muddy Creek Falls in the summer of 1921 would have found the Vagabonds carrying much more camping gear than when they first began camping together in 1915.

Their entourage, consisting of about 40 people, was much larger as this was the first time their wives traveled and camped with them. In addition to family members, six support staff traveled with them to drive trucks, cook, set-up and break-down their camping gear, and be a general camp “roustabout.”

Edison was probably the unhappiest of the group because their camping equipment was becoming more elaborate and cumbersome. Edison took great joy telling his friends stories about his adventures with the Vagabonds, his close encounters with nature, and toughing-it-out in the great outdoors each summer.

Now that their wives were camping with them, the Vagabonds were less likely to drive in the back woods along rough, dust-covered roads with little or no traffic, roads that Edison loved exploring.

Interestingly, Edison overlooked the fact that he too brought advanced camping gear, the like never seen before at a campsite, including a battery-powered radio and several strings of electrically powered light bulbs.

Joseph Hinebaugh, with several other boys, who the Vagabonds bumped from their Muddy Creek Falls camping spot (discussed in a previous article), visited the famous men at their campsite and were amazed to see light bulbs strung all around the camp connected to and powered by an automobile battery.

“…we should be using nature’s inexhaustible sources of energy – sun, wind, and tide… I’d put my money on sun and solar energy. What a source of power! I hope we don’t have to wait until oil and coal run out before we tackle that. I wish I had more years left!” – Thomas Edison (circa 1931)

Note: This is the fifth in a series of articles covering a time in the summer of 1921, when Henry Ford, Thomas Edison and Harvey Firestone camped for two weeks in western Maryland. This article finds the vagabonds, a term the wealthy captains of industry called themselves when camping together, at “Camp Harding” along Licking Creek, about 6 miles east of Hancock, in Washington County, where they stayed from July 21 to July 27. From here they traveled to present day Swallow Falls State Park where they camped from July 27 to July 31.

On the afternoon of July 27, 1921, crowds of people, getting word that the vagabonds were in the area, started gathering along the streets of Oakland, Maryland, hoping to get a glimpse of the world famous men. The vagabonds sometimes caused a commotion when they arrived in a small town. One unknowing observer described the scene as the vagabonds entered Oakland as something like a circus coming to town.

“Every man in his heart revolts at civilization and will revert back to [nature] if given half a chance…We don’t live long enough to find out what life is all about, but we know what civilization is – it is a mere veneer that keeps on getting thicker, but never too thick to pierce…It will be 15,000 years I think, before man will reach such a high point of civilization where he cannot and will not want to go back to [reconnect with nature].” – Thomas Edison at Muddy Creek Falls, Maryland. July 1921

This is the fourth in a series of articles covering a time in the summer of 1921, when Henry Ford, Thomas Edison and Harvey Firestone camped for two weeks in western Maryland. This article finds the vagabonds, a term the wealthy captains of industry called themselves when camping together, at “Camp Harding” along Licking Creek, about 6 miles east of Hancock, in Washington County, where they stayed from July 21 to July 27. From here they traveled to present day Swallow Falls State Park where they camped from July 27 to July 31.

After the outdoor memorial service for their friend, John Burroughs at Licking Creek on July 24, a luncheon was served. President Harding thanked everyone and assured them that he had a splendid time. At about 4:00 in the afternoon, after spending a little more than twenty-four hours with the vagabonds, President Harding and his large entourage of security guards and photographers returned to the White House.

The vagabonds enjoyed the campsite so much, that they decided to stay a few more days after the President left. They fished at the conjunction of Licking Creek and the Potomac River and studied the canal boats hauling coal on the C&O Canal. The industrialists concluded the river’s water power was not properly harnessed; if it was, they believed that the C&O Canal would not be needed.

“Houses could be heated and lighted and factories operated on cheap water power,” Ford told a newspaper reporter.

“The woods will get you if you don’t watch out…Stay out close to nature and you won’t want to come back to the civilizing influences of trolley cars, telephones, porcelain bathtubs and nickel plumbing.” – Thomas Edison at Muddy Creek, MD July 1921

The general public read with great interest the articles that appeared in newspapers across the country reporting the camping adventures of the vagabonds in western Maryland. The Maryland newspapers included photographs showing the famous men participating in various outdoor activities with President Harding, from relaxing in canvas-backed wooden folding chairs to horseback riding.

One photograph captured Edison napping comfortably on the bare ground. Soon after that photograph was taken, President Harding gently put a newspaper over Edison’s face and smiled at child looking on in the crowd and said, “we can’t let the gnats eat him up, now can we?”

After returning to the campsite from a horseback ride, the men went fishing for about 30 minutes in Licking Creek, catching nothing. Edison was overheard saying,” I don’t believe there ever were any fish in this creek.”

A local music dealer from Hagerstown made arrangements for a player piano to be at the campsite. After dinner, the camping party danced to popular music on a small wooden platform. Afterwards they sat around the campfire in a large circle listening to Thomas Edison tell tall-tales.

“Imagine a scenario in which an outdoors-loving president takes a sudden weekend leave from the White House to join up with three of the most powerful industrialists in the Western world at a campsite in the mountains of Western Maryland, where they ride horses, shoot rifles, chop wood, and eat and sleep in tents beside a babbling brook.” – Norman Brauer, author of “There to Breathe the Beauty.”

During the week of July 21-27, 1921, Thomas Edison, Henry Ford and Harvey Firestone camped at a site about six miles east of Hancock in Washington County. During the weekend, President Warren G. Harding joined the “vagabonds” — the name the wealthy industrialists gave themselves when they camped together. The 200-acre farm where they made camp was located about one mile north of the National Turnpike along Licking Creek. Today, the campsite lies inside Camp Harding County Park. A plaque memorializes the gathering of these famous campers.

This was not the first time the vagabonds had been in the Old Line State. In 1918, while traveling from their camp site near Greensburg, Pa., to Leadmine, W.Va., the group passed through Garrett County. They stopped to eat lunch at Swallow Falls and purchased supplies in Oakland.