Maryland remains under a stay-at-home order with schools and many businesses closed, but Gov. Larry Hogan announced a slight easing of restrictions Wednesday on outdoor recreation and nonemergency medical procedures.

The governor amended his stay-at-home order to allow for individual and small group sports — such as golfing and tennis, outdoor fitness instruction, recreational fishing and hunting, recreational boating and horseback riding — starting Thursday.

Also, Maryland’s state-owned beaches and parks will open Thursday for walking and exercise. Local governments will have the flexibility to take similar actions at their discretion, Hogan said.

“I know how anxious people are to get outside, both for their physical and mental well-being, and we know that outside activity is safer than inside activity,” Hogan said during a news conference Wednesday at the State House in Annapolis.

Hogan also announced that hospitals can resume nonemergency procedures, which had been barred in an attempt to keep inpatient populations low in case a surge of COVID-19 cases threatened to overwhelm them.

“Many Marylanders may have put off important procedures, screenings and other things that they really need to attend to,” Hogan said. “If there’s something that you have had to delay — like a PET scan or a biopsy, an angioplasty or an orthopedic procedure — you should now be able to take care of those time-sensitive procedures.”

The changes marked the first easing of Hogan’s strict statewide restrictions, imposed starting in March to limit the spread of the coronavirus. The governor has pushed back against a wider reopening, saying the state needs to reach a sustained decline in the number of hospitalizations for treatment of the illness.

The governor’s move to reopen golf courses followed lobbying by owners and operators of clubs. A Politico reporter even asked him about it in April during a live interview.

“I want to get you on the record on this critical issue,” Politico reporter Jake Sherman asked. “Will golf courses in your state open any time in the near future?”

“Is there particular golf course that you would like to have open?” Hogan responded, chuckling. Hogan went on to say that opening golf courses would be “one of the early things that we do” as part of reopening — a pledge he fulfilled Wednesday.

David G. Bannister, board member of the Caves Valley Golf Club in Baltimore County, said he thinks golf is an activity that can be done safely.

While some courses might reopen immediately, Caves Valley plans to take its time preparing the facility and open May 22.

“We need a couple weeks to get things ready to go,” Bannister said. “Caves is a high-end experience. In order to present it the way you want, it takes a little time to tidy up.”

Republican lawmakers also had pressed to allow golfing, including U.S. Rep. Andy Harris, Maryland’s only Republican in Congress. Though he’s not a golfer, Harris said as an anesthesiologist he understands how to control infections.

TripAdvisor released a list of the 11 greatest places to rent a summer lake house and guess what???

Deep Creek Lake was the first one listed!

Check out the article here. 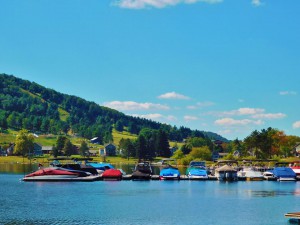 At this point in time, Einstein had created the basis for the atomic bomb (that he did not want to be used to hurt anyone) and the bombs had landed in Japan. He was quoted as saying, “The war was won but peace was not.” In such a hard time in his life, where did Einstein choose to find that peace? 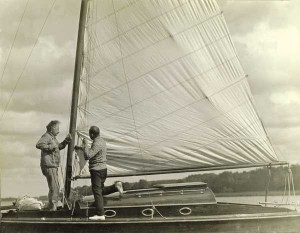 Einstein stayed with a local doctor who was treating him- Dr. Tom Wilson. Throughout his two week vacation, the famous scientist was seen walking his dog, fishing, bird watching, and sailing. With such a heavy heart and mind, Einstein was able to acquire some comfort here at Deep Creek. 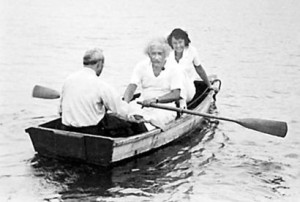 A man, Blair Thompson, was hired to assist Einstein during his vacation. Einstein gave the man an envelope with $50 inside and his signature in the corner. Thompson planned on keeping the envelope as a heirloom but unfortunately he lost it and it was never found. 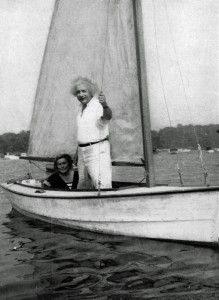 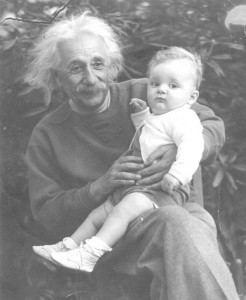 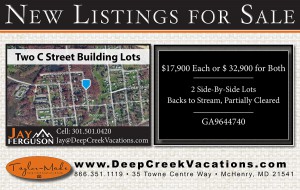 As of March 21, if you wear felt soles on the bottom of your boots and you are standing in water in Maryland you will be breaking the law.

I know that because I saw it at www.dnr.state.md.us

However, as written, the new law applies not just to Maryland trout streams such as the Youghiogheny or the Casselman rivers, but to all of the state’s waters.

Thus, if you are a duck hunter wearing felt-soled boots in a farm pond in Charles County you are in violation of the law.

If you are a trapper wearing felt-soled bottoms and are walking a warm-water rivulet as you check your traps in Dorchester County, you are a scofflaw.

Smile. Your photo on the post office wall will look better that way.

That is good news to Didymo and the Traveling Rock Snots as the group continues its farewell tour.

I guess when a natural resources police officer is being an educator about a new law that means the constable will take names, but not yet kick butt.

I guess that means that someone who has been warned, but is caught again in illegal footwear might have those boots confiscated and will have to walk to district court in his or her socks.

Didymo is already in some Maryland streams, including the Savage River in Garrett County.

It is unclear whether or not felt soles would once again become legal should rock snot spread to all of Maryland’s trout streams during the year of regulation education or thereafter.

It has not been determined, to my knowledge, that felt soles are the sole source of didymo expansion.

Paul Peditto, director of the Maryland Wildlife & Heritage Service, said hunters and trappers will be informed about the new law via the agency’s online regulations. News releases will be issued.

Maryland becomes only the third state to ban felt soles, joining Alaska and Vermont in the endeavor.

The soles are illegal, as well, in New Zealand.

NRP officer to driver of two-toned 1993 Ford 150 parked alongside Bear Creek: “Sir. I see you have felt-soled boots in the back of your pickup. Have you been wading today?”

Driver: Has sheepish look. Says nothing.

NRP officer: “Step out of the vehicle, please.”

I have not yet been able to discover the fines and/or jail time associated with this new law.

I will pass that on to you as soon as it becomes known.