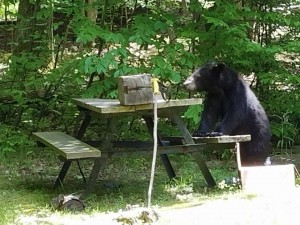 The Maryland Division of Pure Assets is accepting purposes for this yr’s lottery for black-bear searching permits.

The annual bear hunt is a administration device used to sluggish the expansion of Maryland’s black bear inhabitants because it expands eastward.

Hunters might apply in one of many following methods: on-line via COMPASS; by telephone at (weekdays from 7 a.m. to 7 p.m.); by visiting a DNR Service Middle; or at one among greater than 250 sport license brokers throughout the state.

Each spring, agents fan out to find bear cubs and their mothers to tag them for future monitoring. On Wednesday, they were out near Deep Creek Lake.

Deep in a hole in a hillside along a cold mountain stream, a black bear gave birth. State biologists have been tracking the 12-year-old bear with a radio collar for years. On Wednesday, it was time to change her collar and check her cubs. Biologists say their greatest concern is keeping the cubs warm.

It took two to pull the 230-pound adult bear from her den, before a veterinarian checked her.
Read more: http://www.wjla.com/articles/2015/03/md-dept-of-natural-resources-tags-black-bears-112622.html#ixzz3VV5P41Nt

Two hunting guides who pleaded guilty to illegally baiting black bears in Garrett County were fined thousands of dollars and ordered to do 25 hours of community service on Thursday, prosecutors said.

Larry Eugene Harding, 57, of Friendsville, and Wallace A. Harward, 58, of Forest Hill, were ordered to pay $8,000 and $5,000, respectively, in fines and restitution for violating strict state black bear hunting regulations, the Maryland U.S. Attorney’s office said.
Undercover officers from the Maryland Natural Resources Police and the U.S. Fish & Wildlife Service posed as clients of the two hunting guides and discovered that they were illegally using bait to attract the bears for clients to shoot and violating regulations that require a sublicensee on black bear hunting permits to be in view of the licensee, prosecutors said.
Read More Here:  http://www.baltimoresun.com/news/maryland/bs-md-black-bear-poaching-20150205-story.html

CUMBERLAND — A new system for allocating Maryland bear hunting permits is likely to result in applicants from Allegany and Garrett counties receiving about half of them, according to Paul Peditto, director of the Maryland Wildlife & Heritage Service.

The agency has agreed to award the first 25 percent of the permits (65 if the total remains the same) to applicants from the bear hunting zone, which has been all of Garrett and Allegany counties.

Residents of those counties have drawn an average of 35 percent of the permits since bear hunting resumed in 2004. Peditto said the new formula will boost that percentage.

“The applicants from Garrett and Allegany who don’t get drawn for the first 25 percent of the permits will go back into the drawing with everybody else for the remaining 75 percent,” Peditto said via phone Friday.

“They know where bears are and have better access to private lands,” Peditto said, adding that he expects hunting to become a more efficient bear management tool with more local hunters seeking the animals. Peditto said that because most nuisance bears reside on private lands, more of those animals will be taken with the new system.

“It could be, too, that more hunters from those counties will apply knowing that their odds to be drawn have improved,” he said.

The new protocol came as a byproduct of legislation that was almost introduced by Delegate Wendell Beitzel, who sought to have more bear hunting permits go to owners of 50 or more acres of land in those two counties.

“The DNR informed me that it would not be legal to grant landowners special privileges,” Beitzel said. “They asked that I give them an opportunity to work on the issue. I am very appreciative of the DNR’s willingness to make accommodations to resolve some of our requests or concerns,” Beitzel said.

Allegany-Garrett Sportsmen’s Association President Jerry Zembower said he, too, is pleased, though he sought an even greater number of permits for local hunters.

Zembower said the greater allocation will “definitely wake the people up out our way. They’ll see that the DNR is trying to take care of our people, at least a little bit.”

Even though putting more Western Maryland hunters in the woods might make for busier days at the check-in stations, Peditto said he anticipates that the season will continue to last four or five days before the harvest quota is reached.

The agency awaits laboratory results from its first bear population survey in six years, the results of which will be used to establish the harvest quota, number of permits, hunting area and other specifics associated with the 2012 bear season.

Traditionally, there has been a $15 nonrefundable application fee, and permits have been awarded in early September. In 2011, 3,915 hunters applied.

Since bear hunting resumed after a moratorium of a half-century, hunters have legally taken 408 bears. The greatest single harvest was 68 in 2009. The smallest was 20 in 2004.

“This change is good,” Beitzel said. “I know one hunting club with 19 members and none of them have been able to draw a bear-hunting permit.”

Beitzel said the effort to alter the permit allocation was supported by the Maryland Legislative Sportsmen’s Foundation.

OAKLAND — Seven of 13 people charged on Oct. 24 by Maryland Natural Resources Police with bear hunting violations in Garrett County have paid fines. The remaining defendants are scheduled for trials during the next 60 days.

The brief season for hunting black bears in Maryland, an effort to slow bear population growth in the Western part of the state, ended 10 days ago with 65 animals slain, state wildlife officials said.

The Maryland Natural Resources police reported last week on several incidents from this year’s hunt, including one in which two men got lost Oct. 24, opening day, in fog and brush.

Police said they were notified that two hunters had become disoriented in a swamp area of Garrett County. After a six-hour search in fog and dense foliage, the two were found unharmed, police said.

By Don Markus, The Baltimore Sun

Before this year’s Maryland bear hunt, Colton Lucas was considered a typical 12-year-old living in the Western Maryland town of Kitzmiller. He loved to hunt and fish with his father, Joe, and play football with his friends. His priorities haven’t changed in the past two weeks, but the seventh-grader has become a local celebrity. And a hero.

He’s received the acclaim for killing a bear — a 376-pound male, which according to Mayor Mike Brady had been terrorizing the residents of Kitzmiller for several years.

It was the largest bear killed of the 65 taken during the four-day controlled hunt that ended Oct. 27.

Karen Lucas, who grew up in the town of about 300 on the Potomac River’s northern neck near the West Virginia border, could sense the civic pride after the family had loaded the bear her son killed on the bed of their pickup to take it the local taxidermist to get it mounted.

Colton Lucas of Kitzmiller in Garrett County brought down the biggest of the bears, which averaged 154 pounds, according to the Maryland Department of Natural Resources.

— CUMBERLAND — Allegany County District Court Judge Jack Price on Thursday chose not to prosecute a Hagerstown man for hunting bears over bait after his attorney argued successfully that Maryland Natural Resources Police had no right to go onto the private property.

Doy C. Sneckenberger, 47, Murdock Avenue, had been charged by Officer Glenn Broadwater on Oct. 25, the opening day of the Maryland bear season. Sneckenberger was confronted by authorities on family property along Mud Lick Road in the Little Orleans area.

Broadwater had begun to explain that he entered the property based upon information provided by another officer that a violation may be taking place, when Noonan objected numerous times to his testimony and to statements by Assistant State’s Attorney Eric Bean.

Noonan said information supplied by another officer would be hearsay. He also accused Bean of coaching Broadwater’s testimony.

Noonan said the officer had not heard any shots on the property that would encourage him to investigate.

“This man has a gun,” Noonan said, pointing to Broadwater. “I have open land and I wouldn’t want him walking onto it without a warrant. He did not have sufficient cause to go onto that property.”

On Monday, Donald C. Sneckenberger, 75, Sharpsburg Pike, Hagerstown, pleaded guilty to a similar charge and paid a penalty of $500, according to online court records.

Donald Sneckenberger had been charged by Cpl. James Clise on the same day that Broadwater charged Doy Sneckenberger.

Also on opening day of bear season, Earnold L. Crigger, 52, Middle River, was charged with using bait and not keeping in visual contact with the hunting partner in the Swanton area. Crigger on Feb. 7 paid a penalty of $500.

Another case will be heard in Garrett County District Court on May 19 when Jerome S. Ziemski, 55, Baltimore, is scheduled to appear on similar charges.