Oakland, Maryland is the county seat of Garrett County. With over 2,000 residents, the town is small and charming yet offers all the amenities of a resort town. Many residents will notice that their lakefront Deep Creek Lake house address says Oakland. However, the heart of the town is 10 miles south of the Garrett County Highway 219 bridge. Designated as a “Main Street Community”, Oakland is filled with things to do. The town offers many parks, playgrounds, a 18-hole golf course, Broadford Lake (a 140 acre lake with a beach front), an outdoor farmers market, and more! When is the best time to visit Oakland? All the time! From the Autumn Glory Festival to the Little Yough Summer Music Fest to Winterfest, there is always something going on. For more information about Oakland, please visit http://www.oaklandmd.com/index.html. 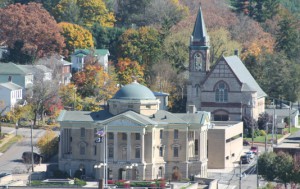 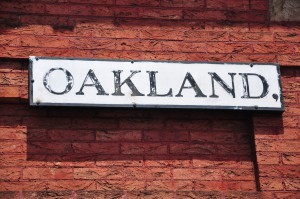 CUMBERLAND — A request for a $600,000 bond bill to support the Allegany Museum moved forward Tuesday when the District 1 legislative delegation to Annapolis voted to introduce the bill this session.

Sen. George Edwards said it depends on how much, if any, money for bond bills is in Gov. Martin O’Malley’s proposed budget, which was set to be released the same day Gary Bartik, museum president, and Joe Weaver, vice president, met with the delegation in Edwards’ capital city office.

The discussion centered around the museum’s request for funding that would be used to help renovate the first two floors of the former district courthouse at 3 Pershing St. Cas Taylor also attended the meeting as a lobbyist for the museum.

Edwards scheduled the meeting after the Allegany County commissioners made the bond bill request in November on behalf of the museum’s board of directors. Edwards said the delegation needed “more specifics on what you want to do with the $600,000 you’re asking for.”

“We don’t know yet if there’s going to be any bond money,” Edwards said, but local lawmakers need to have details of the project if the request moves forward into hearings in the Senate and House of Delegates.

Bartik highlighted the impact on local restaurants and other businesses by noting the museum gets approximately 57 percent of its 8,000 annual visitors from out of the area. Further, the museum has attracted visitors from 46 states and 31 countries.

“I try to frequent the downtown mall” often, said Delegate LeRoy Myers of the Queen City’s commercial center. “You know the thing I’ve noticed about downtown on Friday nights? You don’t know the people. You know why? They’re coming from somewhere else.”

Bartik and Weaver spoke of a planned partnership between the museum, downtown Cumberland and the Canal Place Heritage Area. Bartik said the museum is the first major private-sector entity to invest in Canal Place.

“Tourism is a regional business,” Weaver said. “All of us have to cooperate.”

The two officers talked of a new partnership with the Garrett County Historical Society and Museum and an attempt to form a joint Western Maryland Museum Association. It’s possible to include Washington County if museum representatives there are interested, Bartik said.

The Allegany Museum re-ceived a total of $275,000 in bond bills in the previous two legislative sessions. The estimated $7.4 million renovation and restoration project could require up to $3 million of state funding. Weaver said further investment by the state makes sense.

“If you want to attract visitors, you have to have attractions,” Weaver said. “I think this is just as legitimate an expense of public funds as roads, bridges and industrial parks. We are, in a sense, a part of your industrial park. We’re just a different industry.”