Seventeen people have died in boating accidents in Maryland so far this year, two short of the record reached in 2011 and 1996.
“The victims ranged in age from 7 to 63. They were boaters, crabbers, paddlers, anglers, casual passengers out for a fun day on the water,” said Lt. Col. Ken Ziegler, acting superintendent of NRP. “The vast majority of them were not wearing life jackets. They all had one thing in common: None of them thought anything bad was going to happen to them that day.”

Ziegler has authorized additional weekend patrols from now through Labor Day weekend to enhance our visibility in high-traffic and problem areas. These patrols —around the Chesapeake Bay and its tributaries, Ocean City and Deep Creek Lake — are dedicated to boating safety. Officers will be checking for life jackets and other required safety equipment, looking for reckless boaters and targeting alcohol- and drug-impaired operators.

As the summer recreational boating season gets into full swing, the Maryland Natural Resources Police will join this weekend with the Coast Guard and other maritime law enforcement agencies for Operation Dry Water, a nationwide crackdown on alcohol- and drug-impaired boaters.

From Deep Creek Lake and the Potomac River, to the Chesapeake Bay and the Atlantic Ocean, NRP officers take part in saturation patrols beginning Friday, looking for boaters whose blood alcohol content exceeds the state limit of .08.

The goal of the three-day campaign that combines messages about the dangers of boating under the influence and an increased police presence on the water, aims to drastically reduce the number of accidents and deaths due to impaired boating.

“Protecting the public goes to the heart of our mission,” said Col. George F. Johnson IV, NRP superintendent. “Alcohol and drugs can have a profound effect on a boater’s judgment, balance, vision and reaction time. Operation Dry Water makes it clear that Maryland has no tolerance for alcohol- or drug-impaired boaters.” 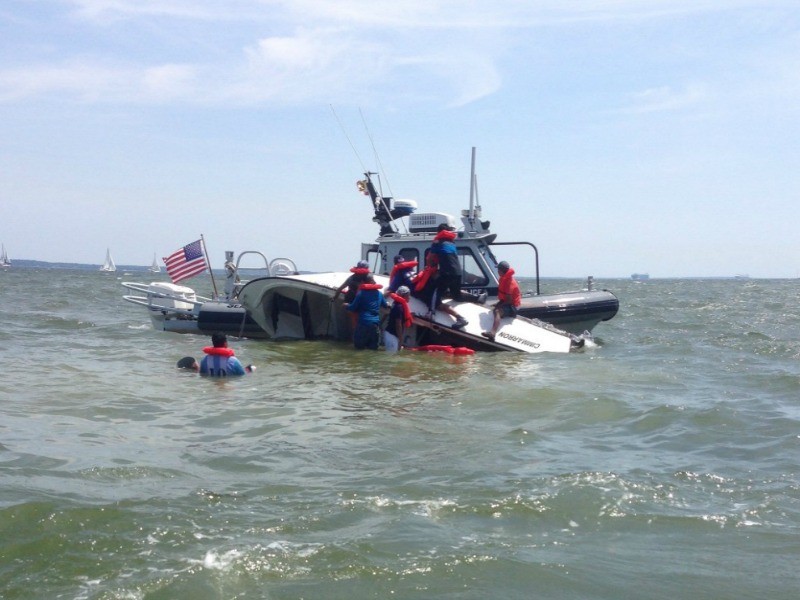 A 22-year-old canoeist and a 40-year-old sailor perished in separate incidents on Maryland waters, their bodies located over the weekend.

No matter what nature does, there are ways people can protect themselves before heading out, or when deciding whether to step aboard at all. Here are some boating safety tips from Candy Thomson, spokeswoman for Natural Resources Police:

Natural Resources Police will be patrolling the state’s waterways and parks. Over the Memorial Day weekend, its officers reported they were out in force—they issued 386 tickets; gave 1,104 warnings; found seven boaters driving under the influence; responded to nine boating crashes, including one fatal in Calvert County; and handled one fatal swimming incident involving a teen in Garrett County.

NRP Steps Up Patrols As Boating Season Gets Underway

With the Memorial Day holiday approaching, Maryland Natural Resources Police officers will be stepping up enforcement of state maritime laws as part of National Safe Boating Week, May 16-22.

Late May begins the annual boating boom and the four-month stretch in which the majority of boating accidents in Maryland occur.

“For many people, Memorial Day weekend marks the first time they’ll be on the water since last fall,” said Col. George F. Johnson IV, NRP superintendent. “It’s important to review procedures, do a bow-to-stern inspection, and make sure all required safety gear is on board and in good working order.”

From today through Memorial Day, NRP officers along with allied agencies will be conducting saturation patrols to intercept impaired boaters and educate the public about best practices.

Maryland boasts a flotilla of more than 178,500 registered powerboats and sailboats, and countless smaller watercraft that ply the Chesapeake Bay, the Atlantic coastline, and lakes and rivers.

— MCHENRY — A boater or swimmer or water skier is just as dead whether he or she drowns in the Chesapeake Bay or Deep Creek Lake and Maryland Natural Resources Police officials say there is too much of that going on.

Thursday morning NRP and Maryland Park Service representatives gathered at Sandy Point State Park near Annapolis to point out the problem as well as the solutions.

Two people drowned in Maryland during the July 4 weekend. Twenty-eight boating accidents were reported during the past two weekends.

At Sandy Point, water users were told how to avoid accidents and how to deal with them should the need arise.

During 14 years of dealing with the same issues, but on Mountain Maryland’s Deep Creek Lake, if Sgt. Jeff Sweitzer hasn’t seen it all he has come pretty close.

“So far this year there have been nine reportable accidents at the lake, one involving a capsized boat, one a boating collision and the others involving injuries to water skiers or tubers,” Sweitzer said on Thursday.

The capsizing took place May 24 when three adults and one 4-year-old were on a rental boat that overturned. There were no injuries.

The collision was between a pontoon vessel and a motorboat. There were 11 people aboard the two vessels and none was injured.

A 48-year-old female broke a shoulder bone when she was thrown from a tube being towed and struck the water.

“It’s common for a group of kids to be towed on a tube and the tube hits a wake or other rough water and one child’s knee strikes another child in the head, things like that,” Sweitzer said.

No matter the size of a boat, there must be one wearable life jacket for each passenger. Boats of 16 feet or greater must have a qualifying throwable life preserver as well.

Although there is no speed limit on the main body of the lake, U.S. Coast Guard rules require an operator to be able to stop the boat within half the distance that can be seen ahead.

“Obviously at night you can’t see very far ahead and that’s when speeding is a real danger,” Sweitzer said.

A number of years ago, Sweitzer was on night patrol when a speeding boat came dangerously close to a fishing boat. Sweitzer began a pursuit.

“The boat was going so fast that it became unsafe for me to continue at that rate,” Sweitzer said. “So I kept on course, but slower.”

Pretty soon Sweitzer heard a man in the water screaming for help.

“It was one of the people who had been on the boat and had fallen without the others knowing it,” he said. “I picked him up and found out that there were nine family members on the boat and they had been drinking heavily. In fact, the man was so intoxicated that he couldn’t recognize where we were on the lake even though he had been coming there all his life.”

Sweitzer said he operated the boat along the shoreline until the man recognized the family boat at a dock.

“We walked up to the house and they were still partying and still didn’t know the man was missing,” Sweitzer said. “In fact, a couple of them argued with me that I hadn’t actually rescued the man.”

The weekend of June 27-29, known as Operation Dry Water, was one of intense water safety patrol on lakes and rivers throughout the United States.

At Deep Creek Lake, on those dates, officers contacted 436 boats, made 320 safety checks, responded to three accidents, issued 32 citations and 119 warnings. There were no arrests for operating a boat while influenced by alcohol.

That changed on the July 4 weekend when there were 18 alcohol violations and two accidents.

The Maryland Natural Resources Police has investigated nine water-related fatalities so far this year. The total for all of last year was 19 fatalities. Those numbers do not include deaths handled by local jurisdictions, such as the two swimming fatalities in Ocean City last month, or accidents that occurred at private establishments.

This year, the victims range in age from 22 to 56. They include a commercial waterman, three swimmers, four men boating in protected waters and an inexperienced kayaker on a miles-wide stretch of the Potomac River.

• Insist that young children or inexperienced swimmers wear a well-fitting Coast Guard-approved life jacket in and the around water.

• Make sure an adult watches children and the elderly when at water’s edge. Keep young children within arm’s reach. If more than one adult is in attendance, take turns being the “Designated Kid Watcher.”

• Make sure you have enough energy to swim back to shore.

Sweitzer offered a couple tips of his own for users of Deep Creek Lake.

Tip 1 — Follow all the safety rules for water users.

Tip 2 — NRP considers enforcement of those rules a high priority for the popular mountain lake.

Texas, for example, is not a safe boating state. In 2011, there were 226 recreational boating accidents reported, 115 injuries and 32 fatalities.

In 2009, there were 4,730 recreational boating accidents reported in the United States, with one fatality per 5.8 registered vessels. The same year, there was one fatality per 7.6 U.S. vehicles — automobiles and motorcycles.

Why should recreational boats be more dangerous than automobiles? There are several reasons. One is education. Many boaters don’t have any. In some states, an operator’s license is not required to drive a boat, even one capable of traveling 100 mph.