A brief look at Deep Creek in the morning.  Thanks Bob Holcomb for the video!!

ANNAPOLIS, Md. –(AP) -Gov. Larry Hogan is announcing the reopening of tourist welcome centers in far western Maryland and the Eastern Shore that the previous administration closed six years ago for budget reasons.

Hogan said in a statement Thursday that the Youghiogheny (yahk-ih-GAY’-nee) Overlook center in Garrett County and the Bay Country center in Queen Anne’s County will be open from 8:30 a.m. to 4:30 p.m. Thursdays through Mondays.

Members of the Taylor-Made Deep Creek Vacations & Sales family vacation rentals and real estate teams participated in the annual HART for Animals Guest Bartender Challenge. Raising over $1,600, the event brought locals and visitors out to JG’s Pub to lend their support to this exceptional organization. 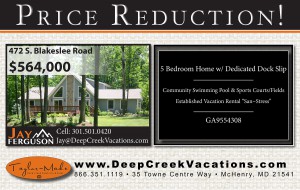 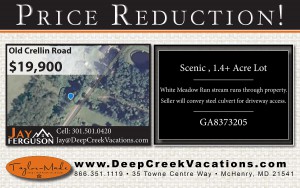 The boom in the unconventional natural-gas drilling method known as fracking hit so fast that scientists have had to scramble to determine whether it is safe for humans and the environment. Mostly they are still trying to catch up.

But a study by the U.S. Geological Survey appears to have answered a critical question about the millions of gallons of chemical-laced water that are injected into the wells to fracture rocks and release trapped gas: Is there any cause for concern when that water is stored later, whether in treatment facilities or special underground wells?

The short answer is yes, said the study’s lead author, Denise Akob, a USGS microbiologist. “The key takeaway is really that we’re demonstrating that facilities like this can have an environmental impact.”

Ms. Akob headed a team of researchers from Duke University and the University of Missouri in studying a stream near a wastewater storage site in Lochgelly, W.Va. Upstream from the site, the waters of Wolf Creek tested normal. Downstream, there were detectable levels of chemicals that commonly lace fracking waste — barium, bromide, calcium, chloride, sodium, lithium, strontium.

Check out this beautiful shot from the Taylor-Made web cam at Boardwalk Bar and Grill!