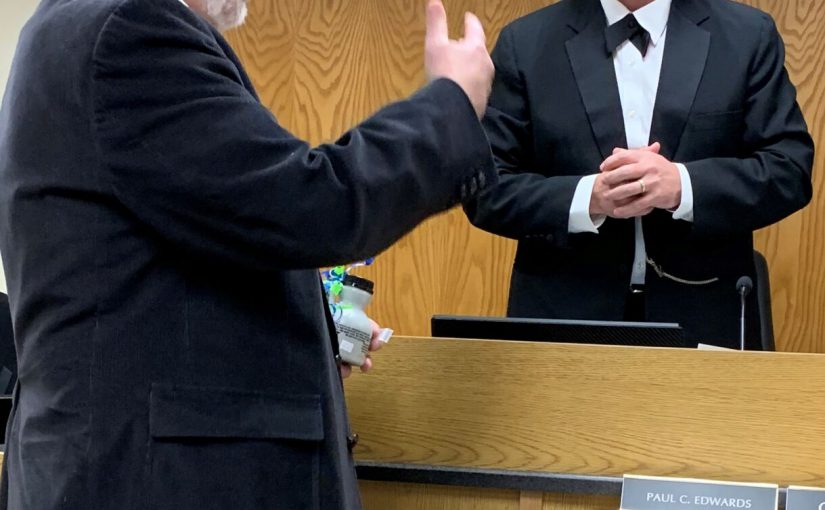 The 150th anniversary commemorates the incorporation of Garrett County on Dec. 4, 1872. It was formed from neighboring Allegany County and was the last county to be created in the state of Maryland.

The event was held as part of the Board of Garrett County Commissioners public meeting Dec. 6.

The program included a proclamation by the commissioners and special guest speakers Robert Boal of the Garrett County Historical Society and Albert Feldstein, a local historian.

“This is going to take obviously a year to celebrate, so everyone that has had a hand in everything that is going on thus far and moving forward, we appreciate it,” Commissioner Paul Edwards said before reading the proclamation to kick off the year of celebration.

“I am honored to speak on the occasion of the 150th anniversary of the county I love and have stayed in for 61 years,” Boal said.

He noted that as far as the creation of Garrett County goes, very little was done before the Civil War.

“There were rumblings of discontent up here in the mountains that we didn’t have enough representation. We were sort of the weak sister, but no movement ever occurred,” Boal said. “With the end of the Civil War, that changed.”

He stated that the region began to boom with the arrival of the B&O Railroad in the 1850s, with agriculture, timber and coal.

“Garrett County felt our wealth and our resources were being taken out of here and we should have more control over all of this,” Boal said.

He mentioned several key players and developers who started the movement.

“It caught on slowly because this was a very remote area,” Boal said. “The awakening in GC started about 1870, and some very powerful locals picked up on it. These men lit the spark that brought the fire.”

He noted that the group started having community barbecues where they met, shared a meal and talked about what this area should be. It turned into a movement that was very strong.

Feldstein stated that the reasons listed on the petition for creation of a new county included the substantial distance from far Western Maryland to the existing county seat in Cumberland, greater representation in the state’s General Assembly, greater opportunities for local tax revenue and more appropriate expenditures of public funds.

Two possible names were proposed for the county: Garrett and Glade.

He noted that the new county was established by the Maryland State Legislature on April 1, 1872, but it was a requirement that it be left up to the voters.

“Congratulations to Garrett County, and we should all look this good after 150 years,” Feldstein said.

Who I Am My name is Jay Ferguson, and I am a lifelong resident of the Deep Creek Lake area. I am also co-owner of the real estate side of Taylor Made. I have been in the real estate business for 21+ years now and I LOVE what I do! I have to say, my career really took off when I co-founded the real estate side of Taylor Made in 2014. Its been an amazing experience, building a real estate company from the ground up and achieving so much so quickly! In August 2016, we purchased Long & Foster Real Estate Deep Creek, where I had started my career in 2000. In 2018, we on-boarded virtually every agent from Coldwell Banker Deep Creek Realty as they closed up shop and the real estate family grew even more! We now have over 40 sales agents and have expanded to West Virginia and Pennsylvania, as well. Taylor Made is the #1 vacation rental company at Deep Creek with over 475 vacation rental homes, and over one hundred thousand yearly visitors. Its amazing what we have accomplished using the principles of honesty, teamwork and customer service! Personally, my wife Jessica and I enjoy traveling and especially spending time in the outdoors, hiking and exploring the many diverse areas that Garrett County is naturally blessed with. We have raised two wonderful children here, Kayleah (22) and Noah (13). In the summer, we love spending time on the water with friends & family and enjoying the lake life! We are both active in our church, our community & local school activities, and we fill our schedule with plenty of volunteer efforts. I currently serve on the board of directors for Habitat for Humanity. I am proud to say that I was named Deep Creek Time’s Favorite ‘Community Champion’ in 2019. I was also named Garrett County Realtor of the Year in 2018-19, as well. I really enjoy promoting my hometown. I am very proud of the resort area that has developed over my lifetime and look forward to growing the area even more! Deep Creek Lake has been described as ‘The Lake Tahoe of the east', and I think that speaks volumes about the potential to own property here! Deep Creek Lake isn't really a town or city by itself; it's comprised of three towns: Oakland, Swanton & McHenry, Maryland. I am very passionate about my hometown and am impressed with how many people know about it as we travel around the country. Deep Creek Lake is an amazing place to visit and even better place to live! During the pandemic in 2020, our market exploded and more and more people left their primary residence in the city to live here permanently. With distance learning in schools and tele-commuting becoming the ‘norm’, many more people were drawn to the area to ‘live where they love to play’. Why You Want Me Working for You: In addition to being an owner, I am consistently one of the top-producing agents in the entire area and the Associate Broker of record for Taylor-Made Deep Creek Vacations & Sales. I have 21+ years of experience and I am a problem solver. There aren’t many situations that I have not encountered and I have a strategy for almost every scenario that you may encounter. I have extensively trained in all areas of real estate & emerging technologies, and also have trained as an appraiser, as well as served as a full-time Broker. I have a strong knowledge of the industry, as well as many trusted local contacts & affiliations that allow me to perform at a very high level and deliver results. I have a great deal of respect for my peers in this industry and have strong working relationships that I would love to put to work for you. Call me to discuss your situation - I know I can be of great service to you & others you care about! Honesty. Integrity. Results. View all posts by Jay Ferguson