This is the view from our office on Saturday!  #Jonas 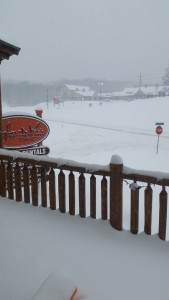 Check out Friday and Saturday!!

Reports are still calling for 1-2 inches before 4 today.  It will be snow angel time before we know it!

Though parts of the Northeast and mid-Atlantic had a gradual introduction to fall, winter will arrive without delay. Cold air and high snow amounts will define the season.

Farther south, ice storms and snow events will threaten the Tennessee Valley and parts of the southern Plains. Much of the South can prepare for a wet winter, with some severe weather encroaching on Florida.

This is a more simplified version of the preliminary 2014-15 winter forecast that I released on July 20th. In this post, I want to go region-by-region and tell you what I believe this winter entails for those areas. Before I do, please understand that this winter forecast is subject to change, but at this time, I am fairly confident in my current predictions for this upcoming winter. Only time will tell if my predictions verify, and if any changes need to be made, I will do so in my final winter forecast which will be coming out in October.

Two of the points that I made in my preliminary winter forecast was that the strength of the El Nino matters and the placement of the above-average sea surface temperatures across the equatorial Pacific matters. That’s why you can’t come out with one of those “this is your typical weak El Nino winter maps” and call it a winter forecast. It simply won’t work. Also, there are other factors that will be big drivers of this upcoming winter because we will likely only be in a weak to weakly moderate El Nino. The warmer waters in the northern Pacific over the Gulf of Alaska could again be partially responsible for another cold winter in the central and eastern United States, while the West has above-average temperatures.

You may have heard by now that we have set the new record for snowfall in Garrett County, Maryland this winter. Well, thanks to my friends at Team One (buy a vehicle from Steve Shaffer, he’s the man!), I got a copy of the official Garrett County snowfall history, dating back to 1939! It’s pretty neat to see how much total snow we’ve had each year. I believe this originated from the State Highway Administration. For the record, we are at 234.5 inches so far this year, which beat the previous record of 2003 by…1 inch.

I’m looking forward to 2 or 3 more snowstorms to CRUSH this record once and for all! Who is with me??