The Deep Creek Dunk will be held this Saturday, February 20th on the lawn in front of Uno’s Chicago Grill. 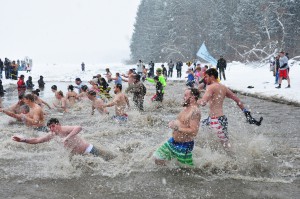 They have already started cutting through the ice.  Photo courtesy of the Deep Creek Dunk Facebook Page.

The 18th Annual MSP/NRP Deep Creek Dunk – don’t be left out of the cold! Let the fun begin and be a part of all the chills and thrills of Dunk 2016 on February 20, 2016 in Deep Creek Lake. It’s not just an event – it’s an experience that has become a winter-time tradition for thousands of warm-hearted Dunkers! And it all benefits Maryland’s children and adults with intellectual disabilities, as they enjoy the life-changing benefits of participating with Special Olympics Maryland.

MCHENRY — The Maryland State Police McHenry Barrack has named Sgt. Brian Broadwater as the 2011 Non-Commissioned Officer of the Year and Tfc. Andrew Farrell as Trooper of the Year for 2011. “Sergeant Broadwater’s performance by his subordinates was exemplary,” said Maryland State Police Capt. James Pyles, Western Troop commander. “His group outperformed many other groups in many rating categories. Sgt. Broadwater’s performance during 2011 was also exemplary. He demonstrates excellent time management skills and pays particular attention to detail. This is always evident in his completion of subordinate appraisals as well as reviewing subordinate paperwork. All of the duties and responsibilities assigned to him are punctual and accurate,”

Broadwater was assigned to the Drug Enforcement Command for several years prior to his promotion and has done an outstanding job adapting to the Field Operations Bureau, according to Pyles.

“Trooper First Class Andrew Farrell currently is assigned two canines, one a German shepherd drug dog and the other a bloodhound tracking dog,” Pyles said. “He displays exceptional attention to detail in all aspects of his job performance and has provided job knowledge and leadership in drug interdiction efforts at the barrack. He employs excellent investigative initiative and technique when investigating criminal complaints. He demonstrates exceptional ability to identify, analyze and solve every aspect associated with criminal investigations. Most of his criminal investigations are self-generated through his aggressive traffic enforcement.”

Farrell is a self-starter who takes initiative in all tasks assigned and assumes responsibility with a take-charge attitude, Pyles said. “His initiative and energy is contagious to the other troopers who work around him and his peers are energetic to work with him. His positive attitude and high level of achievement have a strong impact on his superiors and subordinates alike.”

The 42 personnel assigned to the McHenry Barrack are involved in criminal and traffic enforcement efforts in a partnership with local and federal law enforcement and emergency services agencies. “We are part of a coordinated network of state resources ready to respond in times of crisis and always working to protect the citizens of our great state and Garrett County,” Pyles said.

— MCHENRY — The Maryland State Police McHenry Barrack has announced Cpl. James Pritts as its 2010 Non-Commissioned Officer of the Year and Tfc. Delmas Brick as 2010 Trooper of the Year.

Pritts is a 16-year veteran of the department who has been assigned to the McHenry Barrack as a corporal since February 2008.

“Corporal Pritts’ performance by his subordinates was exemplary for 2010,” said Capt. James R. Pyles, MSP Western Troop commander. “The work group that he commands out-performed all the other groups in overall performance. The troopers under his command consistently go above and beyond in traffic performance and criminal apprehensions. His subordinates received the McHenry barrack Trooper of the Year the past two years. This is a direct reflection on his ability as a supervisor.

Pyles said that Pritts demonstrates excellent time management skills and always volunteers to help in any way possible. “Through Corporal Pritts’ initiative, insight and leadership, he is commended for representing the barrack, the department and the community with the highest of moral values and dedication to serve, exemplifying why he is one of ‘Maryland’s Finest,’ ” said Pyles.

Pyles also commended Brick as Trooper of the Year.

“Tfc. Brick has demonstrated through a tireless work ethic and determination that he is more than deserving of this honor. Tfc. Brick has proven to be a valuable asset to the McHenry barrack and the Maryland State Police,” said Pyles.

Brick has spent his entire career in the Field Operations Bureau working at the Frederick and McHenry barracks. In 2010, he managed the highest criminal case load of any trooper at the McHenry barrack and ranked No. 1 at the barrack in criminal arrests. He also made 1,355 traffic stops in 2010.

“Tfc. Brick is a well-rounded trooper, with a work ethic that is second to none,” said Lt. Mitch Frey, McHenry barrack commander.

“Tfc. Brick maintains a high morale as evidenced by his statistical performance and he gives new meaning to the phrase ‘eight hours of work for eight hours of pay.’ He is never heard complaining and is the definition of a consummate professional. He assists his work group and shares information that may assist other barrack troopers and allied agencies in their investigations.”

The work performed by Pritts and Brick is supported by the 40 personnel assigned to the McHenry barrack, who made 14,310 total traffic stops and made 233 total arrests last year.

“Their dedicated efforts help save lives by reducing traffic crashes and interdicting individuals attempting to further their criminal enterprise by traveling in or through Garrett County,” said Frey.

“The McHenry barrack consists of an excellent group of men and women with whom I am honored to work beside daily. Whether you live in Garrett County, are visiting here, or are just traveling through, all of us in the Maryland State Police are committed to serving and protecting you.”

“Although no specific threats or warnings have been released at this time, troopers have been instructed to step up patrol checks of government facilities and critical infrastructure sites in their area of responsibility,” said May.

“The amount of time taken to locate and positively identify Bin Laden is a testimony to our military and intelligence officials on the national level, remaining steadfast in their objective,” said Hinnant.

Allegany County Bureau of Chief Police J. Robert Dick said late Monday afternoon that he was not aware of any threats and that lines of communication between local, state and federal agencies remain open to share information for the the “benefit of all of our citizens.”

“I think every American can be very proud of our military and the job they did, and special compliments to the CIA and SEAL Team 6.”

Dick urged residents to not delay in contacting police in the case of unusual or suspicious activity. “Don’t hesitate to call police. You are never a bother. If you see anything out of the ordinary or of a suspicious nature, call your nearest police agency right away. It is never a bother.”

In Garrett County, Maryland State Police Lt. Mischael Frey, commander of the McHenry barrack, said, “Personnel will be extra alert regarding activities which could be a threat to national security. I have directed McHenry barrack personnel to be extra vigilant during the patrols for any suspicious activities. There will be additional checking of government/critical infrastructures within our areas of responsibilities beyond the norm.”

The governor spoke with numerous officials in a conference call “to make sure they are in constant communication and cooperating with federal agencies,” said O’Malley spokesman Rick Abbruzzese.

Edward McDonough, spokesman for the Maryland Emergency Management Agency, said about a dozen state agencies were on the conference call, including transportation and health departments and the Maryland State Police.

Although there were no known threats Monday afternoon, law enforcement in Maryland and other states were reportedly on a heightened state of awareness in the aftermath of bin Laden’s death.

Efforts by the Times-News to obtain comments from others heads of law enforcement agencies throughout the region were unsuccessful.

>A Maryland State Police trooper tracked down the owner of a 1970 Damascus High School ring being pawned in North Carolina, an investigating that led to the arrest of a man charged with burglaries in several counties and a neighboring state.

Edward A. Morton, 57, of Garrett County, was arrested this week after a two-month investigation that began when a trooper at the McHenry Barrack learned that the suspect was receiving checks totaling more than $10,000 from pawn shops in Maryland, Washington, New York and North Carolina. Police said:

In early March, State Police investigators learned a pawn shop in Charlotte, North Carolina had received a package of jewelry from Morton. The pawn shop owner gave troopers a description of the items, including a 1970 Damascus High School ring.

With just the graduation year and the initials inside the ring, a State Police investigator called Damascus High School and then made multiple calls to members of the 1970 graduating class. Within days, he had identified the owner of the ring as a woman who lives in Frederick. He contacted her and she confirmed the ring had been stolen along with other items during a recent burglary at her home.

>OAKLAND — Garrett County Sheriff Rob Corley said Thursday he is hopeful that an official relationship between his investigators and those of the Maryland State Police can be rejuvenated, but cautioned that talks are informal and in an early stage.

The Garrett Bureau of Investigation continues to exist, Corley said, but is solely a function of his office. GBI formerly included investigators from both agencies, but that relationship dissolved in late 2007.

“We’ll have to look at other counties down state that have these kinds of arrangements and see how well things are going for them,” Corley said.